Here are some lovely film cells we have in our possession: 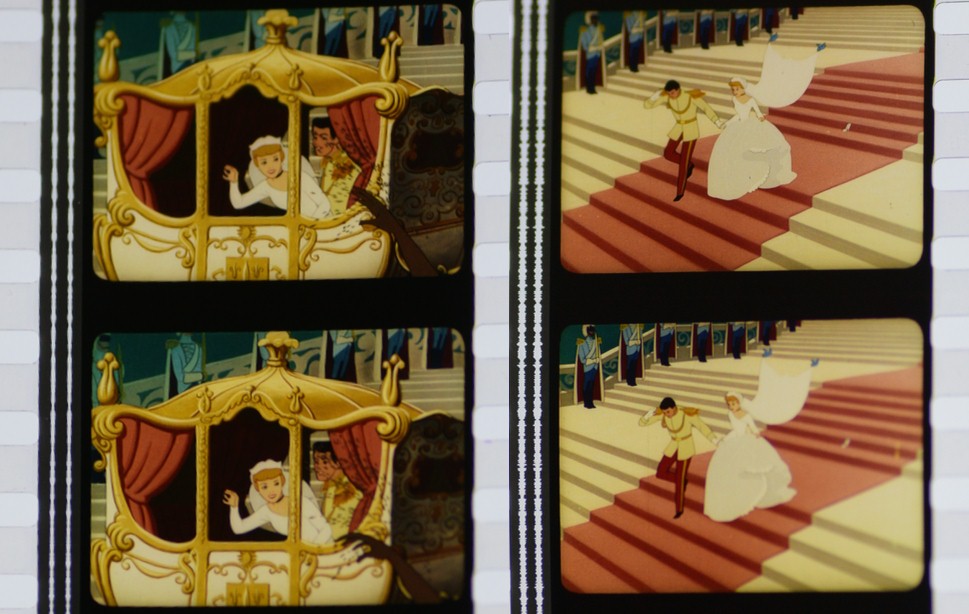 As you might be able to tell, these are from a much loved Disney animation, and are on good old trusty Technicolor Imbibition (IB) film. Besides Polyester film which will last for many centuries, IB prints are the gold standard for collectors. They were unfortunately discontinued in the 1970’s, and from that time until polyester film stock in the later 90’s, all theatrical prints were stuck on Kodak or Fuji film stocks. Generally speaking, these are grainier films with lower resolution, and many of them fade.

How much would you pay me for these beautiful film cells? $1 each perhaps? How about I sell them in strips of 10 frames for $10 a strip? I have around 115,000 frames of this movie… so I guess at that price I could expect to net around $100,000 if we discount the black or damaged frames. Not bad. In case I didn’t make it clear though, these are not film strips. They belong to a complete print of the movie in Technicolor IB. A film I would dearly love to scan when I have the opportunity. If this print was in the hands of a cutter, then we would never be able to preserve it, and nor would we be able to sell it on to a collector who will love and care for it for generations to come.

For those of you not aware, this is the usual fate for films after they’re shown in the cinema:

Collectors and preservationists have something in common: generally speaking we’re not meant to have these prints in the first place. They’re property of the studio, and rented out the cinema. Then at the end of their runs they are either returned, or they’re junked as you see above. They run the bandsaw through them because legally the film becomes the council’s property the moment it lands in the dumpster. Then if you go dumpster-diving (which is a proud tradition for trash and treasure hunters all over the world) you’re in the clear in many jurisdictions. Or at worst you’ve stolen from the council, but they don’t know it because they didn’t see what was in the dumpster.

Sadly though, the film strips that you see on eBay or Amazon are more often than not chopped up from perfectly good film reels. They’re not recovered from the dumpster, instead an entrepreneur bought the print as an investment and began cutting it up to profit from it – we call such people “cutters”. We think it’s perfectly fine to sell film strips or film cells, so long as the seller has not cut them from perfectly good prints. If they’re left over from restoring a print, or if they were recovered from a reel ridden with mould, or if they were taken from a film that had been run through a bandsaw as you see above, we think that’s fine. But please think twice before buying film cells from cutters.