Colour is not what it seems

If you’re an avid film fan it can’t have escaped your attention that the bright colour scheme on this site is aligned to the three dye layers in colour film – Cyan, Magenta, Yellow. But it suddenly occurred to me that Magenta is not a spectral colour – you cannot see it in a rainbow. It exists only because we perceive it to – like white, or grey. What we perceive as white is a bombardment of different spectral colours exciting our “cones”. Here is the complete visible colour spectrum:

See? There’s no Magenta. Magenta would exist in the ultraviolet range, if that range of photons were in the visible spectrum, but we can only see part of the Violet spectrum as it is. Although not labelled clearly on this graphic, Cyan exists at the 490-520 nm wavelength (between Blue and Green). If we could see UV light and perceived it as Magenta, then there would be yet another as yet undefined colour that we would perceive as filling the space between UV and Red on the colour wheel, and not to mention it would impact upon how we perceive other colours as well.

Film works by creating a negative image. So, for possibly the first time ever on the internet, here is the inverse of the spectral colour line:

Magenta appears… and Green’s spectrum disappears (part of the green-yellow spectrum is on there, and that’s where it terminates). Just as Magenta is not a part of the visible spectrum, but is made when combining Red and Blue, in the inverse spectrum Yellow and Cyan would produce Green. We’ll take a look at film in greater detail in the future, for now I’ll leave you with some microscopic cross section views of motion picture film. 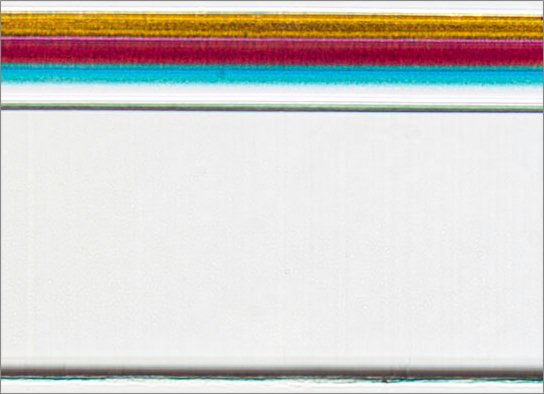 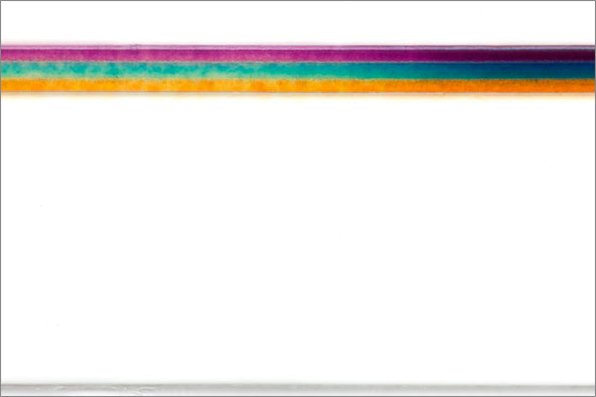