Converting a projector to a scanner

It used to be that scanning movies was horribly expensive, something reserved only for cashed-up rich folks or movie studios and distributors who could afford to pay $20,000+ to have a feature scanned. In a way that’s still true. Scanning triple-flashed on the best pin-registered equipment is slow and expensive. Scanning units are also expensive – even used ones – and can cost thousands of dollars to maintain as well. And that’s if you’re able to source the parts for them, from what we hear many manufacturers will only supply parts to their partners. Sure that $10,000 2K Telecine on eBay might look an amazing bargain – but wait until it break and you need parts for it.

To scan film you need four things: a transport system, a backlight, a capture device, and software to control it all. That’s all a film scanner really is when you break it down. Of course there are a few more things to it than that like storage space, and a lens for the camera, but that’s the basics. An enterprising fellow by the name of Joe Herman has managed to make his own 16mm film scanner out of an old projector: 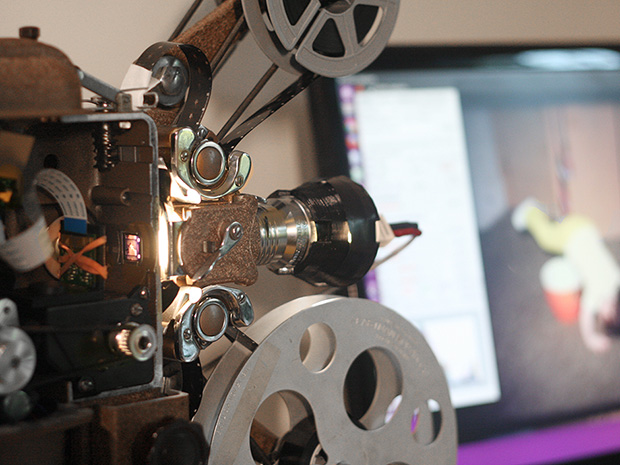 You can read all about it on The Spectrum website. Good on him for creating a very cheap scanner. And for showing the world his creation. Of course with a better capture device you could expect to get much better results and run a faster scanner that doesn’t need to do multiple exposures per frame. The fan-created Silver Screen Edition of Star Wars was created using a scan of a duplicated 35mm print on LPP using a modified 35mm projector as the transport device. There is however quite a bit of scanner noise present in that scan, and it had a poor dynamic range for whatever reason (we don’t know what camera or light source they used).

Here you see another home-built film scanner, this time using an 8mm projector and an Imi Tech machine-vision camera: 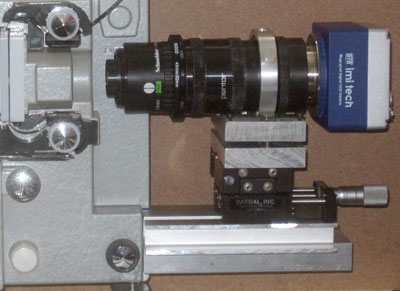 You can read more information about that build on the Cine2Digits website. The slider is for focusing the image – genius! By the way, stay away from the scanners you see on eBay made using camcorders as the capture device – we’ve been told “they’re rubbish”!

Another enterprising fellow by the name of Josh Gladstone has also made his own scanner from a projector, and you can read about it on the Cinematography Forums. Not only did he do that, but he also ripped apart an old Imagica 3000V scanner from the 90’s and rebuilt it to do triple-flash scanning with a mono sensor – what a legend! In his thread you can see some other builds as well that other enterprising fellows have created, including this one:

If you’re interested in creating your own, a guide was posted by “poita” on Original Trilogy a year ago, and recommends the Chameleon3 3.2MP or 5.0MP for 2K film scanning. Plus you can create your own totally unique personal scanner, using whatever projector and parts you want – even a Raspberry Pi with a Camera Module if you’re happy with that quality!